You can do this in any season, but just like with any other stat, when the overall pool of available data is going to be small, we tend to look at “streaks” as more meaningful than they are. If there are only 60 games in the season, then if you “get hot” for like a week, it’s suddenly, “oh wow, that’s a long stretch!”

That is to say, I’ll preach caution against doing the thing I’m about to do, but then I’m going to do it anyway because it’s fun. And sports are supposed to be fun, at least when they provide you the opportunity.

Are the Cubs actually “hot”? I don’t know. Probably not? Two of those four wins came as part of a series split with the Reds, and one of the two wins against the Pirates was an absolute squeaker. The Cubs have had some good results in this very small window of time. I don’t think it says anything new or different about the team.

Instead, I think what I’d focus more on is the return of certain guys (Kris Bryant the biggest), the additions to the bench and bullpen from the trade market, and the injuries in the rotation (Tyler Chatwood and Jose Quintana). Those are the things that are likely to impact the weeks ahead, rather than a good stretch of games with some bats putting up big numbers.

Still, winning four of five does go down in the books, and with the rest of the NL Central kinda meandering along, the Cubs remain in a very good spot now that we’re into September: 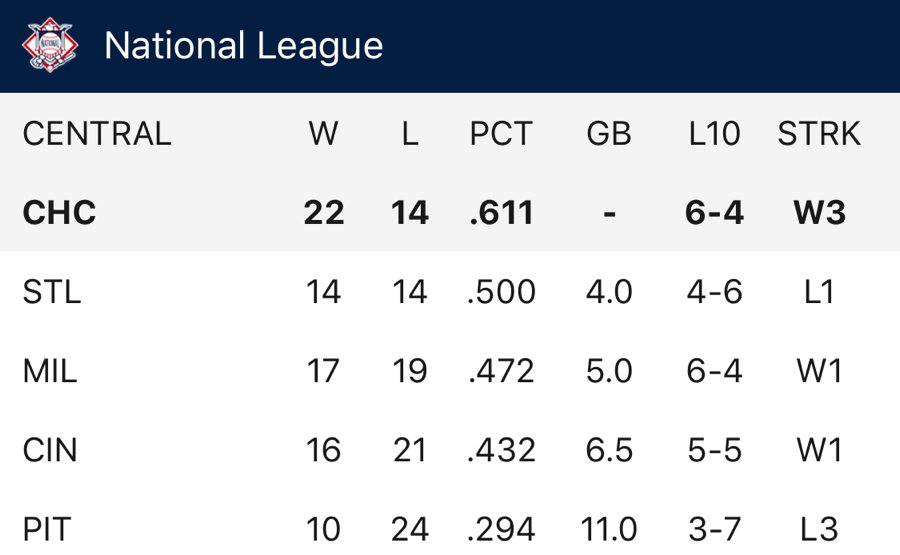 That 4.0-game lead for the Cubs is their largest since August 21 when they got beat up by the White Sox. Kinda says a lot that the Cubs have increased their divisional lead since then, eh? Then again, the Cubs are actually 6-4 since taking the finale in that White Sox series. Maybe they are hot after all!

Ah, whatever. Enjoy the highlights from last night’s comfortable win: