The Cowboys have been connected with Earl Thomas for years, but there’s “nothing” brewing on that front right now, a source tells Mike Florio of PFT. Thomas, of course, is newly available following his release from the Ravens. 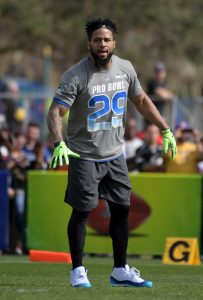 The Cowboys tried to pry Thomas away from the Seahawks two years ago when he was entangled in a contractual dispute with the team. Thomas, meanwhile, added fuel to the fire by repeatedly expressing his love for the Cowboys. The multiple-time Pro Bowler bowed to the Dallas bench after an interception, cut plans short to catch the Cowboys on TV, and leaked further word of his interest to the press through backchannels.

Ultimately, those trade talks were not fruitful. Last year, the Cowboys stood pat as Thomas made the rounds in free agency, but that likely had more to do with his asking price than anything else.

Historically, the Cowboys have been willing to take chances on players with red flags, but Thomas’ rocky year with Baltimore may have dulled their interest. It’s also possible that the Cowboys are finally comfortable with their safety situation after adding Ha Ha Clinton-Dix earlier in the offseason.

As Thomas looks for his next opportunity, he’ll likely have his reps battle things out with the Ravens. The Ravens’ official announcement of the release cited “personal conduct that has adversely affected” the team. As Adam Schefter of ESPN.com (Twitter link) notes, that wording indicates that the Ravens will come after Thomas for money.