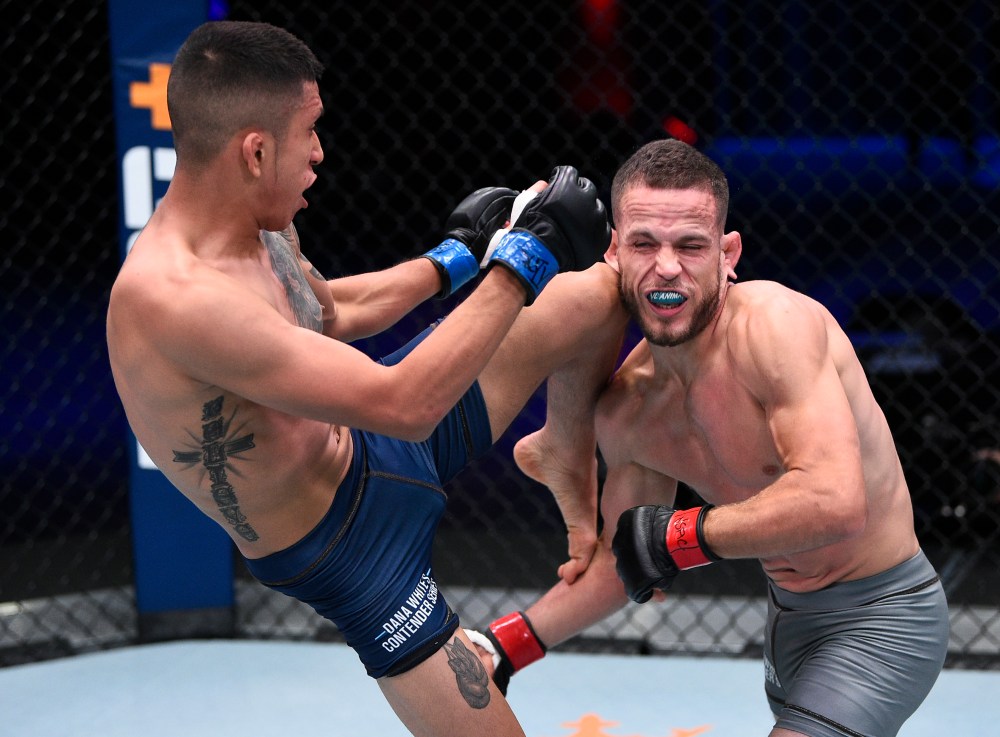 The third time was the charm for Jamie Pickett (11-4), who picked up his first Dana White’s Contender Series win, taking out Jhonoven Pati (6-4) in the featured bout of Tuesday’s DWCS 30 at UFC Apex in Las Vegas. Pickett came up short in his previous two trips to the DWCS cage.

Pickett took the center to start the contest and used feints to study Pati before the tow exchanged low kicks. Pickett did his best to stay at range and use his length to his advantage, but Pati kept close by pressing forward. Eventually, Pickett shot in for a takedown, taking the action to the canvas and slipping past a submission attempt and into side control. Pati quickly turned to his knee and stood, returning the favor of the takedown with an impressive slam to the canvas. Undaunted, Pickett latched on to a guillotine and squeeze from guard, though Pati waited his way through it and then began to deliver a few ground-and-pound blows before his opponent scampered back to his feet, where they traded strikes until the bell.

Pickett landed a stiff jab to start the second, and it clearly dazed Pati. Pickett saw it, as well, and he flurried with several rapid-fire shots down the middle. Pati tried to swing back, but Pickett wasn’t stopping his onslaught, and after a clean left sent him crashing to the floor, referee Mark Smith called off the fight at the 33-second mark of the frame, and Pickett was later awarded a UFC deal.

“WHO WANT IT!”@JamiePickettMMA with an absolutely INSANE combination of punches to close the night! #DWCS pic.twitter.com/LzM7u2IGcI

In a featherweight clash, Rafael Alves (19-9) looked incredibly dangerous on the feet, but it was ultimately his grappling game that scored him a win over Alejandro Flores (17-3).

Alves established the center to start the fight, and he clearly looked to load up on everything with full power. Meanwhile, Flores looked to shift laterally on the outside and attack the legs while waiting to counter.Alves threatened with powerful hooks in tight and flashed out a spinning high kick, as well. He also showboated a bit, briefly putting his hands behind his back. It was clear early he was the more powerful fighter, but the question remained if he could sustain the energy as long as Flores could avoid getting caught flush.

Flores was busier to start the second, clearly not wanting to get backed against the cage again. Alves did again walk forward and look to tee up on something big, but Flores switched stances and moves side to side, keeping himself anything but a stationary target. Alves was perhaps too patient, but he did dazzle with a switch kick – it was just too infrequent. Fortunately for him, it wouldn’t matter.

Flores shot in for a takedown, bringing the action to the floor, but Alves fell into a guillotine and squeezed, working to guard and getting the tap at the 2:55 mark of the round, and ultimately earning a UFC deal.

“Make that SEVEN!”@Rafael_TheTurn grabs another submission win over Flores 🇧🇷

In a flyweight contest Jeffrey Molina (8-2) proved to be too much for a dangerous Jacob Silva (6-3), battling his way to a decision win over the course of three action-packed rounds.

Molina was busy with low kicks early, but Silva was able to catch a few of them and trip him to the floor. Molina was able to scramble to his feet each time, but it put him in a few scary positions early. On the feet, both men threw rapid-fire strikes, with Silva seemingly getting the best of the punching exchanges until the bell, when Molina scored a flash knockdown right at the final tick.

Silva was aggressive in the second, while the longer Molina did his best to stay away and work from range. The exchanges were spirited and frequent. Silva was the one talking forward, but Molina was plenty capable in his attacks, using more kicks than his opponent but probably not landing with quite as much power. Molina landed his best shot in the final minute with a clean high kick, then moved into the clinch and tried to score with knees inside to end the round.

Silva remained the one pushing forward at the start of the third, but Molina was efficient in his striking off the back foot. Silva suffered a cut on his right cheek but continued to push forward. Referee Mark Smith had the doctor take a look at him following a clash of heads, but Silva was fine to continue, and the two pressed on with their relentless exchanges. Molina certainly absorbed his share of stiff strikes along the way, but he didn’t show much of the damage. Silva wasn’t quite as lucky, but he also pushed until the very end, flurrying until the final bell, but it wasn’t enough, and Molina walked away with a decision win, 30-27, 30-27 and 29-28, as well as a UFC contract.

These guys have the Boss standing up on his feet. Who will take the win? #DWCS pic.twitter.com/A3UkUrdGcr

In a lightweight matchup, Anthony Romero (8-0) kept his undefeated record intact with a convincing decision win over Mike Breeden (8-3).

Romero took the center to start, flashing out low kicks and quick hands. But Breeden countered with stiff punches down the middle, clearly earning his opponent’s respect. Both men were content to strike in the early going, with Romero favoring kicks in his combinations but Breeden answering back with powerful straight shots. Romero was the aggressor in most of the exchanges, but he was constantly aware of Breeden’s firepower, as well.

Breeden looked to change levels early in the second but couldn’t get inside. Romero popped him with an uppercut shortly after, but Breeden appeared relatively unaffected. The two continued to trade on the feet, with Breeden having success when he was the busier fighter but often finding himself content to counter, instead. Romero’s low kicks continued to find the mark, and his uppercut landed clean again, as well. Romero constantly sought new angles and mixed in a spinning backfist, as well, before scoring a takedown with a little more than a minute remaining. Breeden worked his way up shortly after, and the two finished the round on the feet. Breeden landed his best shot of the frame in the waning seconds but didn’t stay active enough afterward.

Breeden tried to press in the third, but Romero moved well to escape. It was clear Breeden wanted to brawl, but Romero’s speed and footwork made that difficult. As Romero continued attacking the left leg, Breeden struggled to stay upright. Still, even as he limped around the cage, Breeden did his best to engage. However, Romero settled back into a rhythm, sticking and moving and making it tough to track him down. Breeden deserved credit for his heart, but Romero cruised on the cards, 30-26, 30-27 and 29-28.

At the start of the fight, it was Bowen who was sharp on the feet, landing a few solid low kicks before Huckbody elected to shoot from range, scrambling his way to top position. Bowen then looked to escaped to his feet, but Huckbody rolled with him and was able to advance to mount. From there, he chased after the arm-triangle, missing it on the first few attempts but locking it in on a subsequent effort and getting a quick tap for an impressive submission win at the 1:28 mark of the opening round that was good enough to score a UFC deal. 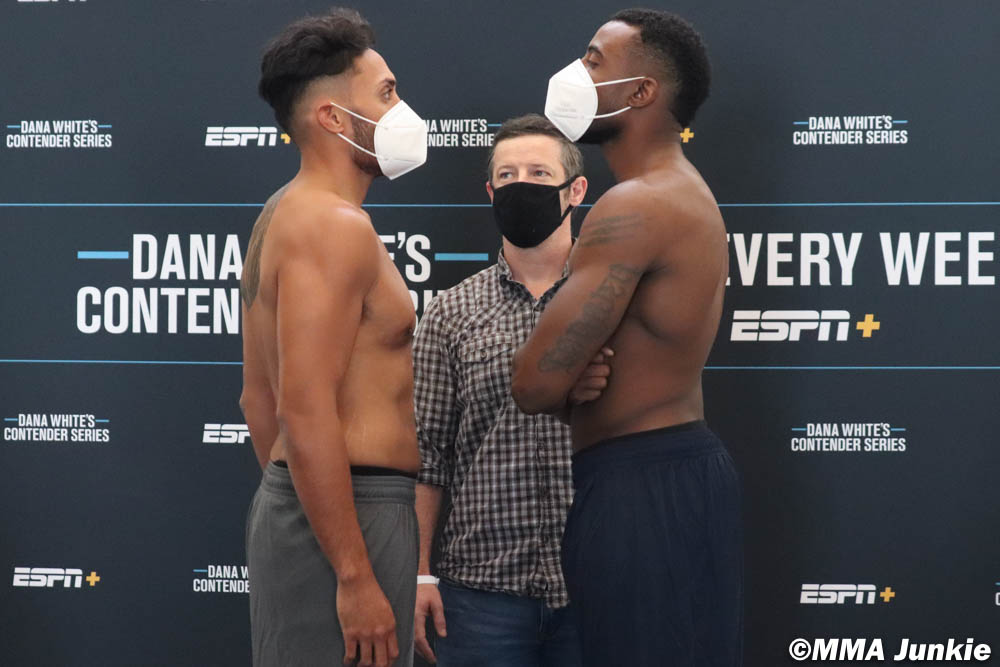