ON THE NIGHT the LA Clippers landed Kawhi Leonard as a free agent and traded for Paul George last July, Doc Rivers talked with the team’s president of basketball operations, Lawrence Frank, dozens of times.

First there was a debate over just how much the Clippers should give up in the trade with the Oklahoma City Thunder for George. Would Leonard really sign with the rival Lakers if the Clippers failed to acquire George as his co-star? Could they afford to find out?

The conversation had been ongoing for days, but by the night of July 5, it was time to decide. Four future first-round picks and promising young guard Shai Gilgeous-Alexander was a lot. But trading for George and signing Leonard would make them instant title contenders. Clippers chairman Steve Ballmer would make the final decision, but he wanted their opinion, too.

For Rivers, the choice was simple. If you have a chance to win a championship, you go for it. Because those chances don’t come around very often.

Rivers was having dinner at Nobu, a high-end sushi restaurant in Malibu, when Frank sent him a text saying the deal was done. He largely contained his excitement, although a curious security guard saw him yell out, “Yesssss!”

Once Rivers got into his car, he and Frank could be more candid about what the franchise had just done. He’d experienced franchise-altering moves like this before. When he’d coached the Boston Celtics, the team acquired Kevin Garnett and Ray Allen in 2007 to pair with Paul Pierce.

New England Patriots coach Bill Belichick had counseled him then, “You either land the plane smoothly or it’s a plane crash.”

A championship was expected now. And if it didn’t work out, Rivers joked with Frank, everybody was getting fired.

MORE: The Clippers’ gamble to replace Doc has to hit

IT WAS NOT the kind of joke you laugh at. Just a statement of fact, funny only in its searing honesty. Still, when it came to Rivers, it was hard to imagine the Clippers making good on the implicit threat. Even when he publicly took responsibility for the Clippers’ failure to advance out of the second round of the playoffs, blowing a 3-1 series lead against the Denver Nuggets, few within the organization or around the league suspected Rivers would take the fall.

This was Doc Rivers, the coach who had brought a credibility the franchise had never had before with his arrival in 2013. Doc Rivers, the man who led the franchise and the league through the scandal over former owner Donald Sterling’s racist remarks in 2014. Doc Rivers, the Black coach whom NBA Players Association president Chris Paul had called to address the league’s players on Aug. 26, when the NBA paused to grapple with social justice issues.

His voice had become one of the most powerful in all of sports. And after three other Black head coaches had been fired this year, it was hard to conceive that Rivers would be the fourth.

Behind the scenes, though, no one knew where Ballmer would land. As excitable and expression-filled as he generally appears during games, he has been hard to read as an NBA owner. 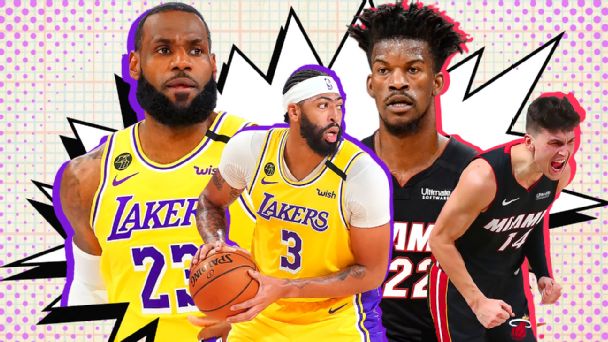 The Los Angeles Lakers and Miami Heat will face off in the 2020 NBA Finals. Check out all our latest coverage here.

• Finals are more than LeBron vs. Miami
• Real or Not: AD as MVP? Heat destiny?
• The embodiments of Miami Heat culture
• Anthony Davis’ high-stakes playoffs
• Shelburne: Appreciate LeBron in 2020

When he bought the team in 2014, Ballmer made a point of saying he would take his time to learn and study the organization before making any big moves, “I don’t know the first thing about owning a basketball team,” Ballmer said over a long lunch after his introductory news conference. “I was joking with some of the players, ‘You all know more about what an owner should do than I do because I’ve neither worked for an owner nor been an owner.'”

And indeed, Ballmer took his time in assessing how best to move the Clippers forward. His most memorable change the first few seasons probably was creating a mascot for the team, Chuck the Condor.

But those close to Ballmer knew it was only a matter of time before he put his stamp on the franchise. He made his fortune as a technology entrepreneur by constantly looking to innovate. And once he’d learned the ropes as an NBA owner, he brought that culture to the Clippers. Employees were urged to come up with new ideas and present evidence to support them.

So when Ballmer and Rivers began discussing what had gone wrong this season, sources said that instinct is what led Ballmer to question whether a new way of looking at the team, or a new voice, is what the Clippers really needed.

Over the course of about 10 days following the Clippers’ Game 7 loss to the Nuggets, the third consecutive game the team had blown a double-digit lead in the second half, Ballmer and Rivers had multiple lengthy phone conversations, sources said.

Ballmer consulted with Frank, minority shareholder Dennis Wong and consultant Jerry West. Before a final decision was made, sources said Ballmer called several key players — including George and Leonard — to get their opinions. Nothing the players told him, sources said, changed Ballmer’s mind about moving on from Rivers. Ultimately, the decision to part ways with Rivers was Ballmer’s.

Rivers didn’t feel comfortable continuing as coach without Ballmer’s full support, believing a solid relationship between the coach and ownership was fundamental to success in the NBA. Ballmer didn’t feel entirely convinced that Rivers had a better strategy and approach to next season than a new coach with a new viewpoint would.

It was made official Monday morning, but sources said it had become obvious over the weekend that the relationship had come to an end.

THE DECISION SENT shock waves through the league. Like Belichick had warned him all those years ago, the coach of a team with championship expectations either wins a title or crashes. But the Clippers’ failure as a team was so widespread it was hard to pin it solely on Rivers.

Rivers believed the team was undone by a lack of chemistry and leadership. They needed more time together than the handful of games they played at full strength as Leonard and George worked their way back from injuries and slowly integrated into the grittier team that had overachieved the year before. And he believed they were finding that identity, right before the season stopped due to the COVID-19 pandemic.

“The last 10 games, we were turning into the Clippers,” Rivers told reporters on a Zoom call during the hiatus. “We started understanding each other. … We were playing seamlessly through Kawhi and PG. It wasn’t forced anymore. Guys weren’t trying to stay out of each other’s way. You could feel the rhythm.

“I really thought we were about to make a crazy run down the stretch. And unfortunately, bam, it stopped.”

Rivers had hoped the bubble environment would be good for the Clippers’ chemistry. Instead, Patrick Beverley, Montrezl Harrell and Lou Williams missed significant time due to deaths of family or friends outside the bubble. Ivica Zubac and Landry Shamet were late in arriving after contracting COVID-19. Then Beverley, who strained his left calf and missed all but one game in the first round against Dallas, and Harrell struggled with their conditioning once they returned to the team.

The biggest issue, however, was the team’s collective spirit.

During the 4½-month layoff, the team tried to stay together through text messages and workouts. Sources said that as the season restart grew nearer, George and Leonard organized group workouts several times a week, in either Los Angeles, the Inland Empire or San Diego.

Still, there were several key players — most notably Williams — who were never fully on board with finishing the season in the bubble. And against the backdrop of social unrest around the country, Rivers gathered the team for a vote on whether to restart at all.

It passed but only after they all decided they had enough “in common” to play.

After the season was halted on Aug. 26, the Clippers again voted on whether to finish the season. This time, they voted no. It wasn’t until Rivers was summoned to a late-night team meeting that the team voted to continue on with the season.

For Rivers, this was everything. None of the chemistry issues and injuries that kept them from finding a rhythm on the court were going to change unless the players embraced their time together in the bubble and the chance to win a championship.

He didn’t mind talking through emotional issues with his team, but he couldn’t keep being the loudest voice in the room, pushing them onward. At some point that leadership had to come from within. Neither Leonard nor George had ever been a vocal leader. Beverley wasn’t afraid to express his opinions, but he had a hard time recovering from a calf injury and then staying on the court and out of foul trouble. Williams was seen by many as a leader, but he’d been unenthusiastic about the bubble to begin with and disappointed many in the organization by visiting a gentleman’s club in Atlanta while in the area for the funeral of a friend’s father.

When Rivers retraced and analyzed what went wrong with Ballmer, these are the issues he focused on. His plan for next season involved staffing changes, schematic adjustments and improved chemistry from another year of playing together. He also believed they needed a true point guard to help organize their offense.

For Ballmer, the questions were different: Why was there a lack of leadership? Why was the chemistry lacking? Why were players so unenthusiastic about playing in the bubble?

RIVERS AND BALLMER delved into all of these questions and issues in the 10 days following the season-ending loss to Denver. They simply could not find common ground on a vision for the future.

When Rivers and Ballmer spoke Monday, the only thing left to do was discuss how they’d deliver and present the news, sources said.

It was lost on no one that the Clippers’ official release said that Ballmer and Rivers had reached a mutual decision that Rivers would step down. This was between them. Two strong-willed titans of their own industries who’d come together in an arranged marriage six years ago. The marriage had survived a lot in those six seasons. Frankly, it survived better than most marriages where the owner chooses their head coach.

Ballmer had been methodical and deliberate in learning how to be an NBA owner. He’d spent six years assessing the franchise he’d bought for $2 billion and formulating a vision for its future.

He’d traded away a tremendous amount of draft picks and young talent for George and the best chance at signing Leonard. Then he dropped $400 million to buy the Forum in Inglewood to clear the way for his franchise to have a gleaming new arena to play in. This is his vision.

Doc Rivers has always had a gift for knowing exactly what to say in the toughest situations. But Steve Ballmer said everything he needed to Monday, when he decided that wasn’t enough.

MORE: Was Doc really the problem for the Clippers?