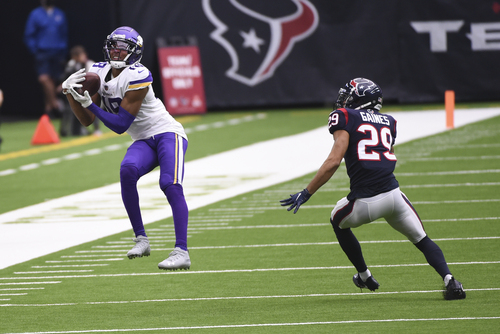 Welcome to our morning-after Vikings blog, where we’ll revisit every game by looking at two players who stood out, two concerns for the team, two trends to watch and one big question. Here we go:

After he came off the field following the Vikings’ final touchdown drive of their 31-23 win over the Texans on Sunday, Kirk Cousins was met by backup quarterback Sean Mannion, who asked in jest, “You been working on back-shoulders to Justin?”

It was a moment of levity between two passers who know the particular challenges of the back-shoulder throw — the hours of practice needed to perfect its timing and placement, the confidence it requires in a receiver’s attention to detail and body control.

Cousins simply does not have much of the first commodity with rookie receiver Justin Jefferson after a shortened training camp and canceled preseason. So, when the Vikings needed to convert a third-and-6 in the fourth quarter on Sunday, Cousins banked on the second.

“At some point, you just got to play and believe he can do it,” Cousins said of Jefferson. “And after he adjusted, found the ball, made the catch, kept his feet in bounds and made the play, I looked at whoever I was with — Dalvin [Cook] or Adam [Thielen] — as we were moving up the field and said, ’18 can play. That’s not easy to do.’ Yeah, are we going to build trust over time? Yes, we’re going to build trust. But some of the things we’re doing, there is no trust. It’s just raw ability and you’re putting the ball out there hoping, believing that he’s going to be able to make it happen.”

The 22-yard back-shoulder throw Cousins completed to Jefferson, against man coverage from Texans cornerback Phillip Gaines, was the first-round pick’s fourth and final catch on a 103-yard day. It made him the sixth rookie in Vikings history with back-to-back 100-yard receiving games, and it illustrated just how quickly he’s worked his way onto the short list of Cousins’ most trusted targets.

Cousins completed passes to only four receivers on Sunday — Thielen, Jefferson, Cook and Kyle Rudolph — and his average completion to Jefferson came with only 2.3 yards of separation from the closest defender, according to NFL Next Gen Stats (the league average this week was 2.84). The back-shoulder throw led to a 25-yard Cousins-to-Thielen connection with the quarterback rolling to his right, and ultimately set up the Alexander Mattison touchdown the Vikings would need to win the game.

“That’s Kirk just trusting me to make that play,” Jefferson said. “The funny part about it is we’ve never really worked on those back-shoulder throws, and to be able to go out there and do it in the game and complete for the first down, that’s trust right there.”

Trust, particularly for Cousins, seems to be a valuable commodity.

Consider the much-discussed deep shot he took to Tajae Sharpe on fourth-and-3 against the Packers in Week 1, when the quarterback overthrew Sharpe and coach Mike Zimmer intimated after the game he would have rather Cousins tried Thielen on the other side. Cousins pointed out the safety shaded to Thielen’s side of the field, saying after the game he generally doesn’t like throwing go balls with a safety over the top of a receiver.

The play became an emblem for the idea Cousins doesn’t trust himself enough with tight-window throws or give his receivers enough chances to make plays, and on the Vikings’ final series of the third quarter on Sunday, he took a second-down sack when he hitched with Jefferson open on a corner route.

On the following play, Cousins floated a throw for Jefferson against man coverage from Vernon Hargreaves, fitting the throw into a window where Jefferson could pluck it over the top of Hargreaves for 23 yards as Cousins got hit. Then Cousins hit Kyle Rudolph for 19 yards along the Vikings’ sideline while retreating and falling away from the Texans’ pass rush.

The Vikings’ last two scoring drives on Sunday showed what the quarterback can do when he believes in his arm strength and his receivers, and what happens when he hesitates. It was a source of consternation in the relationship between Cousins and former Washington coach Jay Gruden, and it’s an area where the Vikings have tried to nudge Cousins toward playing with more assertiveness. The Vikings’ final two touchdown drives hinged on the fact he let it fly when it mattered most.

“It’s just a feeling that you have,” Zimmer said Sunday. “I think the more confidence he gets in understanding he can make those, the more he’ll do them.”

Cousins has now targeted Thielen or Jefferson with 51 of his 100 passes this season, and even as Stefon Diggs thrives with a 4-0 Bills team, Jefferson is quickly showing he can join Thielen as the kind of downfield option Cousins enjoyed with Diggs. Jefferson is tied for the league lead with eight catches of 20 yards or more; Diggs has the same number for Buffalo.

As the Vikings head home from Houston and prepare for a Sunday night matchup in Seattle (albeit in a less harrowing environment than CenturyLink Field would present with a capacity crowd), they’ll likely need to be ready for a shootout with Russell Wilson. Jefferson’s emergence, and Cousins’ growing trust in him, gives the Vikings another reason to think they can compete in such a game.

Here’s a look at one other player who stood out in Sunday’s 31-23 win:

D.J. Wonnum:We could highlight a number of the usual suspects here — Cook ran for a forceful 130 yards, Thielen caught eight passes and Eric Kendricks combined 12 tackles with an impressive third-and-9 pass breakup — but we’ll go with Wonnum, the rookie defensive end who played 18 snaps on Sunday and is getting a little more work in the Vikings’ base defense. He raced in untouched for an easy sack of Deshaun Watson on Sunday, and tackled David Johnson after a four-yard gain on second down in the second quarter.

Two areas of concern
Secondary in pass coverage:The Vikings were in a difficult spot on Sunday after Harrison Smith was ejected late in the second quarter. Zimmer said the team had worked George Iloka as its backup nickel corner with Mike Hughes injured, adding he asked Iloka on the sideline “if he knows what he’s doing at safety” to make sure he could handle his assignments after a position switch. But the Texans’ best stretches of offense on Sunday were when they sped up their tempo in an effort to sow confusion in a young secondary, and Russell Wilson will present an even tougher challenge on Sunday night. The Vikings had allowed more explosive plays than any team in the NFL before Sunday, according to Sharp Football Stats, and they allowed nine passes of 15 yards or more on Sunday.

The Vikings’ ability to close out games:For the second straight week, the Vikings got the ball in position to wrap things up if they could put together a long drive and run out the clock. Against the Titans, they took possession with 6:31 left and gave Tennessee the ball back with 3:52 to go, allowing plenty of time for a Stephen Gostkowski go-ahead field goal. On Sunday, the Vikings got the ball with 5:52 to go after Watson’s touchdown to Kenny Stills, but the Texans could use two of their three timeouts after carries from Alexander Mattison that netted two and four yards, and Cousins slightly underthrew Thielen in man coverage on a third-and-6 that would have ended the game. Instead, it was a play the quarterback said after the game he wanted back, and it put the Texans in position to drive to the goal line before the Vikings’ final stop sealed the game.

Two trends to watch
Whether Irv Smith gets more involved:The second-year tight end has struggled to make an impact so far, and was targeted just once on Sunday in a game where he played 41 of the Vikings’ 66 offensive snaps. The team uses Smith in enough different ways that it’s unfair to judge his contributions solely as a receiver, but it did draft him to become the type of downfield threat against safeties it simply hasn’t had. Rudolph has a $9.45 million cap number for 2021; in a year where the Vikings will be tight against the cap, Smith’s emergence (or lack thereof) might be a factor in how they handle their soon-to-be 31-year-old tight end.

Special teams contributions:The Vikings’ speed produced the game’s only turnover on Sunday, when Mike Boone raced down the field to force DeAndre Carter’s fumble on a first-quarter punt return and former Penn State track and field athlete Dan Chisena was there to recover the ball. But their average starting field position (their own 22.5-yard line) is still worst in the league, and they’re still waiting on rookie K.J. Osborn to break out as a return man.

One big question
Does Sunday’s win create a “blueprint” for the 2020 Vikings?You’re likely to hear some form of that idea throughout the week —after the Vikings beat the Texans with many of the same offensive tenets they used the week before against the Titans — and you’re likely to hear Vikings coaches demur by talking about how things change week-to-week. But a quarter of the way through the season, we can say with some confidence that the 2020 Vikings’ path to victory is likely to look different than any they’ve previously used under Mike Zimmer. They held the ball for 36:31 on Sunday, after losing time of possession battles for much of the year, but the Vikings’ penchant for giving up big plays means they can’t just expect to win by controlling the clock. They’ve stressed red zone defense this year, and won on Sunday while keeping the Texans out of the end zone on all three of their red zone trips, but have allowed points on 26 of 43 drives this season (a 60.4 percent clip) after never allowing teams to score more than 34 percent of the time during Zimmer’s first six seasons.

So while trading scores in shootouts is something the Vikings might have to do more often this season, it’s not necessarily a sustainable way to win. If Sunday’s victory is to turn into any kind of successful reboot for the 2020 Vikings, they’ll likely have to pair defensive improvement with an offense that appears to have three legitimate playmakers (Cook, Thielen and Jefferson) to go with the reliable Rudolph. The next three quarterbacks they’ll face — Wilson, Matt Ryan and Aaron Rodgers, all veterans who have quarterbacked teams to Super Bowls — will test their young secondary. But as Harrison Smith said last week, nothing can match games against great quarterbacks as a developmental tool. Cousins, on his best days, is effective, not transcendent; the Vikings still need to play with leads to utilize Cook and make their quarterback comfortable. To do that, they’ll have to repeat what they’ve done the past two weeks and get more stops that result in zero, not three, points.

Zimmer defends Smith after ejection: ‘He’s not a dirty player’