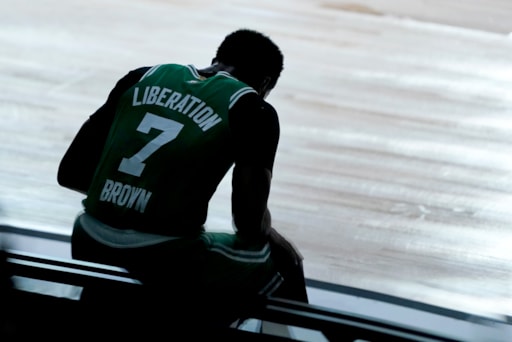 With talk of ditching the bubble and 2020 finish facing NBA players once again, this time in the middle of the playoffs, Celtics star Jaylen Brown has reportedly challenged his fellow players to talk the talk and walk the walk for change, according to ESPN’s Marc Spears.

To Brown, who reportedly told the Bucks that he fully understood their decision to protest Wednesday’s game against the Magic, that means leaving the bubble if it’s with the intentions of joining in the protests and fights against racial injustice and inequality.

Brown himself did this, driving from Boston to Georgia to participate in protests in June, so his voice carries significant weight in these talks, and especially so as one of the leaders of the NBPA.

It’s unclear where the league will go from here, really. The Lakers and Clippers have reportedly voted against continuing the season, and while it’s unclear if they would indeed decide to opt out, it’s almost impossible to imagine how the league would soldier on with LeBron James, as well as Kawhi Leonard, deciding to go home.

That players will hope to get a clearer picture on their next steps on Thursday, with a meeting scheduled for 11 a.m., and with Thursday’s slate of playoff games (including Game 1 between the Raptors and Celtics) appearing “unlikely” to go on as originally scheduled.

Click here for 98.5 The Sports Hub’s complete coverage of the NBA.

Ty Anderson is a writer and columnist for 985TheSportsHub.com. Any opinions expressed do not necessarily reflect those of 98.5 The Sports Hub, Beasley Media Group, or any subsidiaries. Yell at him on Twitter: @_TyAnderson.