The Super Bowl-winning coach of the Seattle Seahawks has delivered an impassioned call for an end to racism in the United States, urging his fellow coaches and players to speak out, and use their platform for good.

Pete Carroll, 68, told a press conference on Saturday that a change in attitudes was long overdue and denouncing ‘a system of slavery’ which has ‘never gone away.’

And he said white people need to be ‘educated about what the heck is going on in this world’.

He said the team had decided earlier that morning to cancel practice, and to all register to vote instead. 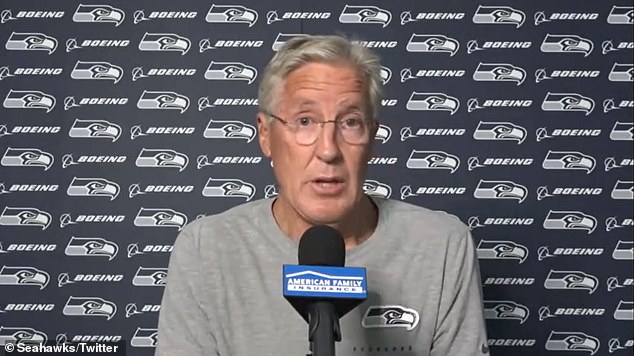 Pete Carroll, coach of the Seattle Seahawks, delivered a powerful address on Saturday 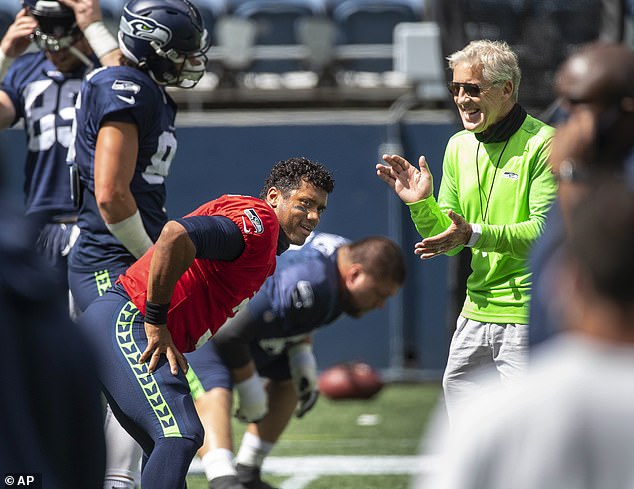 ‘No more, you know, I might lose my job over this, because I’ve taken a stand here. Screw it.’

Carroll, who coached the New York Jets, San Francisco 49ers and New England Patriots before joining the Seahawks in 2010, said this season had an urgency to it like he’d never felt before, in his 50 years of coaching.

‘I want to talk to you guys about some stuff that’s on my heart,’ he said, beginning his 15-minute speech.

Carroll praised his players for helping educate him on the reality of racism in the U.S.

As of June, 70 of the 90 players on the team were black, the News Tribune reported.

‘Never before this year has it been so deep and so rich with our players, teaching us about what the life is of a black man or woman in America,’ he said.

‘There is less concern, less fear. This has been a process of truth telling and reality checks.

‘This is about racism in America that white people don’t know. 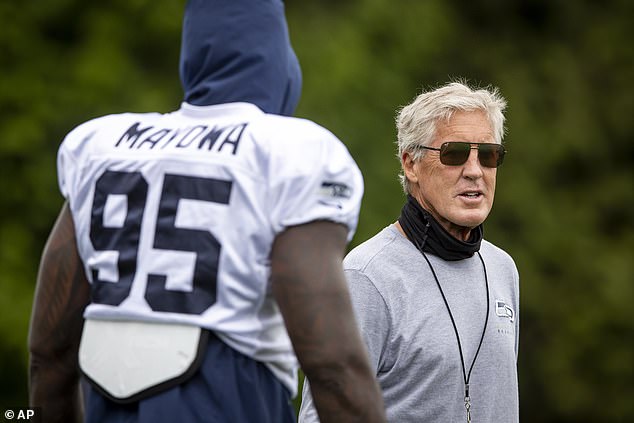 Carroll thanked his players for helping to educate him, in a team where 70 out of 90 are black

The San Francisco-born coach said he was in awe of the resilience of black Americans, who continued to strive for a better future despite all the obstacles.

‘They can’t march anymore or they can’t bare their souls anymore to what they’ve lived with for hundreds of years.’

Carroll said the heart of the problem was that ‘white guys came over from Europe’ with a ‘great idea’ about democracy and freedom and equality for all, but it has never come to fruition.

‘That’s not what happened because we went down this other road here — follow the economics and rich white guys making money,’ he said.

‘And they put together a system of slavery.

‘And we’ve never left it, really. It’s never gone away.

‘And the really amazing thing that I’ve learned is black people know the truth. They know exactly what’s going on. It’s white people that don’t know.’ 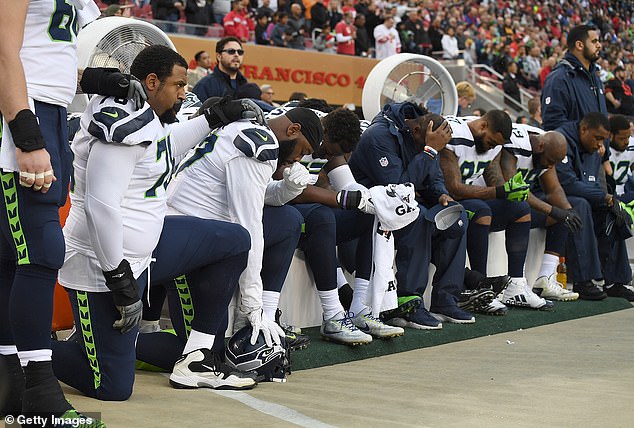 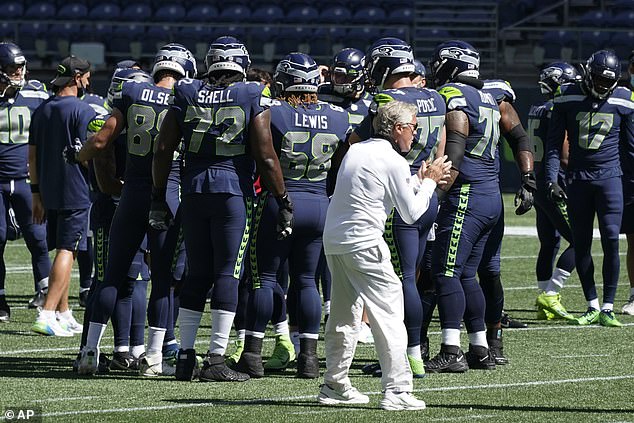 He said Americans had been ‘taught a false history’ of their county.

‘We all know the history was screwed up. We all know that. It’s we have to learn really what’s going on so we can feel our people, so that we can respond.

Carroll’s players were quick to praise their coach for his support of their concerns.

Quarterback Geno Smith tweeted a clip of the speech, with a bullseye right on target.

‘This is a special place, like I’ve said before where everyone’s willing to learn and understand that wrong is wrong, and right is right.’

And Russell Wilson, another quarterback, retweeted Adams’s call for all to vote in November.