‘What is wrong with you?’: Shkodran Mustafi angers Arsenal fans by bidding farewell to ‘unselfish’ Mesut Ozil in bizarre tweet after £350,000-per-week star ends Gunners nightmare by joining Turkish side Fenerbahce

By Cian Cheesbrough For Mailonline

Shkodran Mustafi angered Arsenal fans as he bid farewell to ‘unselfish’ Mesut Ozil after the German ended his Gunners nightmare by joining Turkish side Fenerbahce.

Ozil, 32, is set to be officially unveiled as a Fenerbahce player after his £350,000-a-week contract was terminated early by Arsenal with the midfielder not playing at all for the club this season.

The mercurial midfielder had years of success after joining in 2013 but has left under a dark cloud after being exiled from the team in recent seasons under former manager Unai Emery and current boss Mikel Arteta. 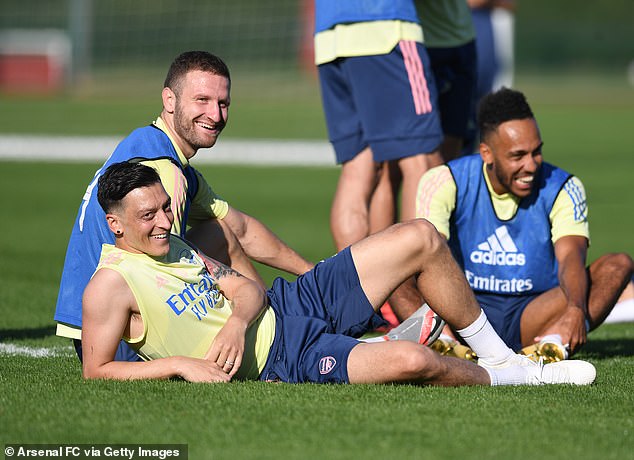 He also stirred controversy in 2020 when he refused to agree to a 12.5 per cent cut to his mammoth wage, unlike most of his team-mates, during the first national coronavirus lockdown at a time when Arsenal were having to let go members of staff.

So fellow German Mustafi’s farewell tweet, labelling Ozil as ‘unselfish on and off the pitch’ and suggesting the club had let him down, didn’t sit well with some of the Gunners faithful on Twitter.

Mustafi’s Tweet read: ‘Bro, you have been the most unselfish player on and off the pitch, I have ever shared the dressing room with. You will be always remembered as the #AssistKing. Unfortunately we as a team haven’t been able to assist you when you needed us the most. All the best.’

One fan, @AFCHarv, wrote: ‘HES THE MOST SELFISH PLAYER WE’VE HAD’, while @arsenalbarclays responded: ‘Please explain? £350k/week: if this is not assistance I don’t know what it is?’

Another fan, @Marcus49AFC pointed out Ozil’s refusal to take the temporary wage drop, saying ‘Ozil refuses wage cut that 20 of his teammates agree to. Mustafi: “you’ve been the most unselfish player off the pitch”.

@owiiemma added: ‘You are an Arsenal player man. You should be on the side of the club. You should be trying to help us move on from the situation. What is wrong with you?’

Ozil arrived in Istanbul late on Sunday evening, with Fenerbahce tweeting some pictures of their impending signing, alongside the message: ‘Our club is bringing Mesut Ozil to Istanbul to continue the transfer processes.’ 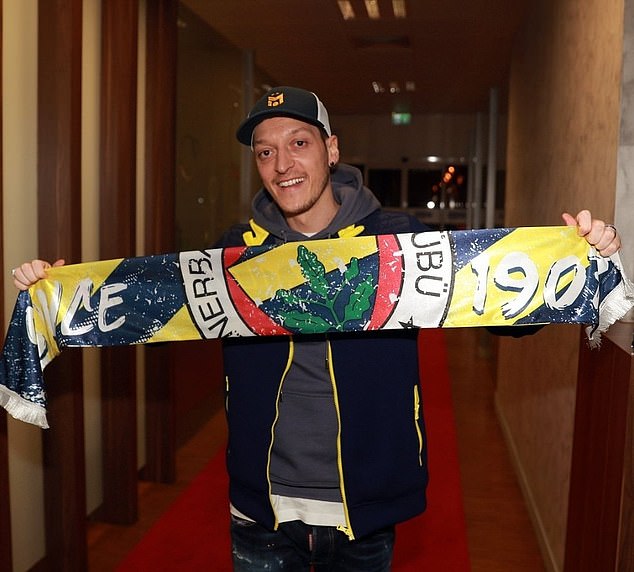 Speaking about the move, Ozil told NTV: ‘I am a Fenerbahce fan. That is why I am very happy to be coming to Turkey with Fenerbahce, I’m very excited. God gave me the chance to wear this jersey as a Fenerbahce fan. God willing, I will carry it with honour and do everything I can for the team.

‘Of course, I’m missing a few matches. I haven’t played in a match in a while, but I am physically fit, I have no issues,’ he said, adding he had been training with the first team at Arsenal during his time off the pitch.

Ozil leaves the club having helped Arsenal to lift three FA Cup trophies during his time, the first of which in the 2013-14 season helping them end their nine-year trophy drought.