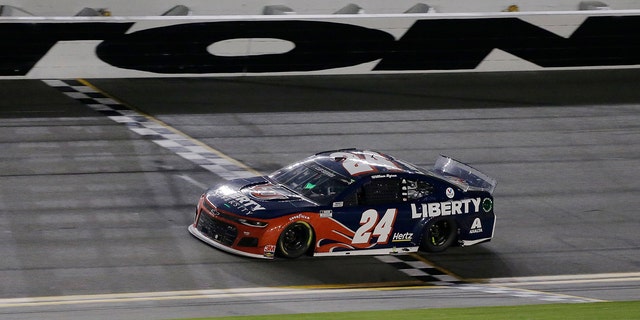 Those moves got him to victory lane for the first time in his young NASCAR Cup Series career and back in the playoffs for the second consecutive season.

Winless in 120 races, Johnson made a trip to victory lane to congratulate Byron and the No. 24 team, the one now directed by Johnson’s former and long-time crew chief, Chad Knaus.

“It’s a big win for Chad Knaus and William Byron,” Johnson said. “I really felt like we had a way to transfer, to win, or point our way in and things just got ugly. Unfortunate, but that’s plate racing.”

Byron won the race in overtime after two late cautions and locked up one of the three postseason berths available going into the finale. Matt DiBenedetto finished 12th and secured the final spot. Clint Bowyer wrapped up a berth at the end of the opening stage. 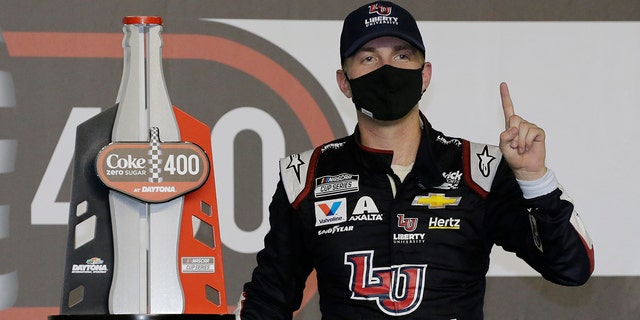 “It was too eventful,” said DiBenedetto, whose parents drove down from North Carolina to watch from the stands. “I’m mentally worn out. I’m gonna sleep great tonight, but there was so much going on there at the end.”

Johnson looked as if he would land one of those three playoff spots. But he got shuffled back in the final stage and then got caught up in a wreck in the closing laps that started when Hamlin made contact with Joey Logano. Byron squeezed between the two, took the lead and held on after a green-white-checkered finish. 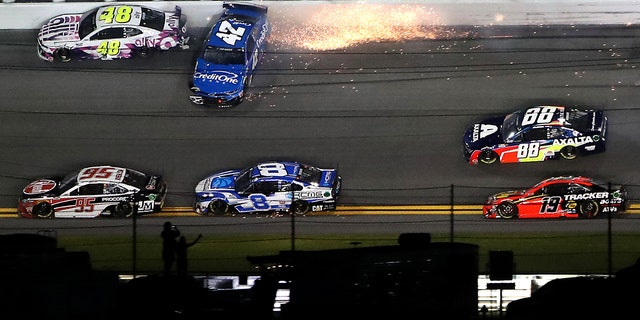 It was the ninth overtime finish at Daytona’s summertime race in the last 13 years.

Byron didn’t care how he got it, just that he finally did.

“It’s been a hard couple of years in the Cup Series and trying to get my first win and trying to jell with this team,” Byron said. “These guys have done an awesome job and to be in the playoffs is amazing, man.”

About 20,000 fans spread out across Daytona’s massive motorsports stadium and were treated to a frantic finish. The race was pretty clean for most of the night, but got crazy down the stretch.

Tyler Reddick started the first multi-car crash by trying to block Kyle Busch after getting a huge push to take the lead. Busch clipped Reddick’s bumper, sending him into the outside wall and collecting several other cars.

“(Reddick) just ran out of talent,” Newman said. “All it takes is one goofball to make a mistake.”

Reddick accepted responsibility for the wreck.

“If someone made that move on me, I’d be pretty mad, too,” he said.

Byron swerved his way through clouds of smoke to stay in the mix there. He was even luckier after Hamlin and Logano got together.

He did a burnout that included a few spins through Daytona’s wet infield grass and then headed to victory lane for the first time in three years.

Johnson met him there, quite possibly a visual changing of the guard at Hendrick. The 22-year-old hotshot is headed back to the postseason with a long-awaited victory and the 44-year-old veteran is sliding into retirement without the storybook ending he talked all week about wanting to at least maintain as a possibility.

Byron has taken remote classes at Liberty University, and the winning car carried sponsorship from the school. The deal was brokered between Hendrick Motorsports and Jerry Falwell Jr., who stepped down this week shrouded in scandal as head of the university.

Wallace said before the race that there was not much of a dialogue among NASCAR drivers regarding sitting out the Cup Series regular-season finale at Daytona.

NASCAR pressed on at its historic track while other sports postponed games and practices this week in the wake of the shooting of Jacob Blake, a Black man, by a White police officer in Kenosha, Wis.

“We still have a lot of work to do as a nation to make things better for us, our next generation coming up through,” Wallace told NBC Sports before the race. “Us not following suit (with other sports) does not mean that we’re standing down. We still know what’s on our table or what’s on our plate to go out and accomplish and attempt to accomplish to make this a better place.”